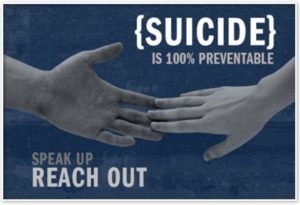 Greetings everyone! For National Suicide Prevention Awareness Week 2016, Dissipating Disparities, Inc. is joining the Nation in making it our business to do our part for Suicide Prevention Awareness.  Some of you may know someone that has thought about suicide, attempted suicide or actually been successful in committing suicide.  Some of you may not.  Either

“Dissipating Disparities, Inc. is concerned with Saving Ourselves through Awareness, Acceptance & Action.”